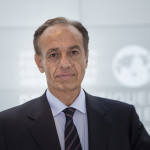 Ambassador Checchia was born in Ancona (Marche Region) on 22 March 1952.

He obtained a Degree in Political Sciences from the University of Florence (31 October 1974), followed by a one-year advanced International Studies course at the Johns Hopkins University (Bologna Center), in addition to scholarship-funded summer courses on contemporary International Law organised by the International Court of Justice in The Hague.

Mr. Checchia started his diplomatic career as Diplomatic Volunteer on 4 May 1978 and later attended the Diplomatic Training Course at the Istituto Diplomatico between 1 August 1978 and 31 January 1979. He was first assigned as Assistant Attaché to the Ministry of Foreign Affairs (MFA), Directorate General for Economic Affairs, Middle and Far East Countries Desk, on 1 February 1979 and later to the Press and Information Services, Office of the Spokesman on 9 November 1979.

He was appointed Consul to France in the city of Bastia on 29 July 1985 and then assigned to Ankara on 15 November 1987 as First Secretary, an office he maintained until his promotion to Counsellor on 1 May 1988.

Mr. Checchia returned to the MFA on 2 January 1990 and was assigned to the Directorate General for Political Affairs, CIS and Central/Eastern European Countries Desk, where he remained until 3 September 1995 also as Deputy Desk Director. In this capacity, he regularly participated in the meetings of NATO and EU working groups dealing with former Soviet Union countries and related issues.

While in Rome, he attended the Higher Vocational Education Course from 1 December 1990 to 30 November 1991, which he successfully completed with a dissertation on the importance of the “ethnic factor” in the dissolution of the Soviet Union, one of the three selected for publication.

During the same period, he was called to represent the MFA at the Inter-ministerial Central Committee for the Recognition of Right of Asylum, involving Justice, MFA and Home Affairs ministries.

Assigned to the Office of the Italian Permanent Representative to the EU in Brussels on 4 September 1995 as First Counsellor. He was the Italian representative within the EU Working Group for Enlargement (and Chair, during the Italian Presidency in 2003), where he contributed to the preparation of the 2004 accession of ten Mediterranean, Central and Eastern European countries. Likewise, he represented Italy in the EU Working Group on former CIS and Eastern European Countries and related EU-funded assistance programmes (TACIS Programme).

Posted for the second time to the Italian Embassy in Ankara on August 1999 as Minister-Counsellor and Deputy Head of Mission.

On 20 August 2001, he returned to Rome following his appointment as Diplomatic Advisor to the then Minister of Productive Activities (now Minister of Economic Development), a position he held until 1 October 2006.

From 2 October 2006 to 17 October 2010 he served as Ambassador of Italy to Lebanon. According to OECD reports, at that time Italy was the third donor country, after France and the US. In 2009, the OECD Development Assistance Committee selected Lebanon for a field visit, which led to recognise Italy’s ability in coping with the peculiar Lebanese environment, while ensuring consistency in the implementation of Italian-led projects under the direction of the Italian Embassy. Support embraced a number of priority areas ranging from: environment to local, development, as well as cultural and rural development, healthcare and social issues, with a special accent on lower-income population and the improvement of living conditions in Palestinian refugee camps on Lebanese territory (in close coordination with UNRWA and the relevant Lebanese authorities).

At the end of his mandate, Mr. Checchia returned to Rome and was appointed Special Envoy of the Italian Minister of Foreign Affairs for Afghanistan and Pakistan.

Mr. Checchia took up his duties as the Diplomatic Advisor to the Minister of Defence in June 2011.

On the 24th of February 2012, he was named rank Ambassador by the Council of the Ministers.

Appointed Permanent Representative to the Atlantic Council in 2013.

He is married with Mrs. Dilek Zadil and has one daughter, Alessandra.

After completing his degree studies, Mr. Checchia graduated at the Italian Navy Academy at the end of a six-month course as Reserve Officer in Leghorn (Livorno) and was then commissioned as Ensign (Guardiamarina) in the Italian Navy for two years in 1976-77.

Across his career, he received the following awards and decorations: