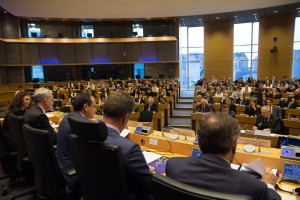 FRAMEWORK
The current international security environment features new threats and challenges for both NATO and EU member countries, enhancing the need for greater partnership and cooperation between these organizations. With particular reference to the NATO Warsaw Summit and the recent NATO-EU Joint Declaration along with their standing agreements on cyber security, this conference will focus on how both organizations can best use their existing resources to develop a cooperative security strategy that will effectively counter the ongoing threat of Hybrid Warfare.

OUTCOME
This conference brought together experts, policy makers, officials, and industry representatives to analyze the impact and recent progress from the NATO-EU Joint Declaration and how the Warsaw Summit has enhanced NATO-EU cooperation.

With a particular emphasis on resilience and the key areas where NATO-EU cooperation yields the highest added value, panelists and participants outlined a list of best practices for both institutions and the private sector that outlined a clear strategy of implementation for the NATO-EU Joint Declaration in areas where cooperation can be complementary.

SEIZING MOMENTUM: HOW TO ADVANCE NATO-EU COOPERATION ON HYBRID WARFARE
The NATO-EU Joint Declaration constitutes an “important milestone” and a unique opportunity to enhance cooperation between both organizations. At present, the Euro-Atlantic community must cope with threats and challenges originating with unprecedented speed from the East as well as from the South. Terrorism, cyber warfare, energy security and the refugee crisis, are among the most critical issues that need to be effectively addressed by an enhanced multilateral cooperation. The strengthening of NATO-EU cooperation is indeed key in countering Hybrid Warfare. To this end, reinforcing European defense industry by increasing the public-private partnership is a fundamental step. Panelists will debate on the way to address these threats and the opportunity to enhance practical cooperation in the new complex security environment.

Conversation with the Experts
Securing Cyberspace from Hybrid Threats